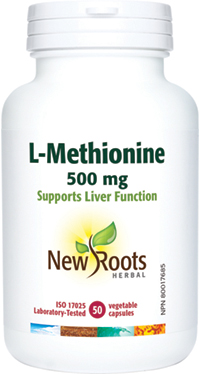 ʟ‑Methionine is one of the essential sulphur amino acids. It is called a “methyl donor.”

ʟ‑Methionine is one of the essential sulphur amino acids. Called a “methyl donor,” ʟ‑methionine contributes to the formation of numerous important compounds in your body; this process is called “methylation.”

The body cannot produce ʟ‑methionine; it must be obtained from food or supplement sources. Methionine functions as a sulphur donor to aid in your body’s detoxification processes and can convert to other sulphur amino acids. ʟ‑Methionine is also a transporter of the antioxidant mineral selenium.

In addition to its role as a precursor in protein synthesis, ʟ‑methionine participates in a wide range of biochemical reactions, including the production of S‑adenosylmethionine (SAMe), ʟ‑cysteine, glutathione, taurine, and sulfates. SAMe itself, as a methyl donor, is involved in the synthesis of creatine, epinephrine, melatonin, and the polyamines spermine and spermidine, among several other substances.

ʟ‑Methionine is classified as an essential amino acid for humans, and therefore must be supplied in the diet. According to the Food and Agriculture Organisation of the United Nations (FAO) and World Health Organisation (WHO), recommended daily ʟ‑methionine intake is 13 mg/kgbw, or about 1 g daily for adults. This is principally derived from dietary proteins; rich sources of ʟ‑methionine include cheeses, eggs, fish, meat, and poultry. ʟ‑Methionine is also found in fruits and vegetables, but not as abundantly. Small amounts of free ʟ‑methionine occur in vegetables, vegetable juices, and fermented foods. Sunflower seeds are an excellent source of methionine, while soy is very deficient. Diets deficient in ʟ‑methionine may result in destructive breakdown and metabolism of protein. ʟ‑Methionine is also a glycogenic amino acid and may participate in the formation of ᴅ‑glucose and glycogen.

Adults: As a dietary supplement, take 1 capsule once or twice daily with food or as directed by your health-care practitioner.