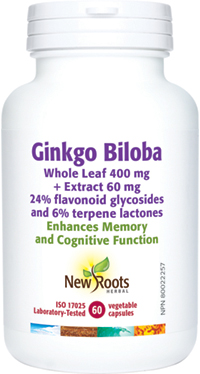 Ginkgo biloba is one of the oldest living tree species in the world; geological records indicate this plant has been growing on Earth for 150–200 million years. It has been used in Oriental medicine to treat respiratory and circulatory ailments and to help brain function.

Through hundreds of studies done on this plant, it shows to be a good antioxidant and primarily to have potent action on the cardiovascular system. It acts on the lining of the blood vessels, toning the venous system, thus enhancing oxygenation and blood flow especially to the brain and extremities.

Ginkgo biloba also acts as a powerful antioxidant and contributes to the oxidation of free radicals, which are believed to contribute to premature aging and dementia. Antioxidants also protect the eyes, cardiovascular system, and central nervous system.

Ginkgo biloba has been used for many years to help in cases of cerebral and peripheral vascular insufficiency, dementia, depression, inner ear dysfunction, and vascular fragility.

Ginkgo biloba stimulates cerebral and peripheral circulation. It increases oxygenation and blood flow in the brain, improving brain functions, memory, and concentration. It has the same effect on the extremities, keeping hands and feet warm, and helping with problems such as numbness and tingling.

Ginkgo biloba constituents are beneficial for a variety of imbalances and deterioration in the brain and body. Standardized ginkgo extract inhibits platelet activating factor (PAF), which is a common allergen in the body. Physical stress and poor-quality food can overstimulate PAF production; in other words, blood clotting. Excessive PAF can help cause cardiovascular disease, brain damage, hearing disorders, and other immune and inflammatory diseases.

Ginkgo has two groups of active substances: flavonoids and terpene lactones, including ginkgolides A, B, and C; bilobalide; quercetin; and kaempferol. The ginkgolides have been shown to control allergic inflammation, anaphylactic shock, and asthma.

Adults: Take 1 capsule two or three times daily or as directed by your health-care practitioner.

Duration of use: Consult a health-care practitioner for use beyond 4 weeks.

Cautions and warnings: Consult a health-care practitioner prior to use if you are pregnant or breast-feeding; or if you are taking medications for diabetes, high blood pressure, or seizures.

Contraindication: Do not use if you are taking health products that affect blood coagulation, as this may increase the risk of spontaneous bleeding.

Known adverse reaction: Allergy/hypersensitivity to Ginkgo biloba or members of the Ginkgoaceae family may occur.