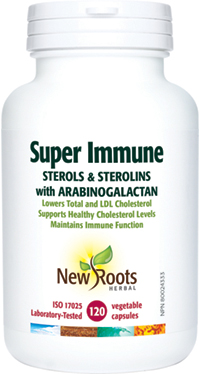 Sterols and sterolins are highly bioavailable forms of plant fats and alcohols that exert a positive effect on cholesterol levels. They also are recommended for use with immune-system modulation and for arthritis-related pain.

Just What Your Immune System Needs

Super Immune Sterols and Sterolins helps both under- and overactive immune systems, because it is an immune modulator, not an immune stimulator; that means it corrects and balances the immune system, no matter which way it needs to be adjusted. North Americans tend to eat too much meat and not enough fruits, vegetables, and seeds—where beta-sitosterols are naturally found.

beta-Sitosterols are natural supplements that have been used for years to treat suppressed immunity and also play an important role in the prevention and treatment of the other major killers of our day. A number of studies have shown them to be an excellent supplement for the immune system. Studies have shown them to boost a number of immune system components, including T cells, interleukin‑2, gamma interferon, and natural killer cells. Completely safe, they are nontoxic, possess no known drug interactions, and can even be used by pregnant and nursing women.

In vitro studies have shown that larch tree arabinogalactans stimulate the function of some immune cells.

Another group of people who will benefit from supplementing with New Roots Herbal’s Super Immune Sterols and Sterolins are athletes and exercisers who train intensely. This group of people are well-known to suffer from immune suppression because of the intensity of the exercise. A very interesting double-blind study of healthy marathon runners looked at the ability of beta-sitosterols to counteract the immune suppression of heavy exercise. Amazingly, while several measures of immunity dropped significantly in the placebo group, there was absolutely no drop in the group receiving the sterols and sterolins. As in the AIDS research, beta-sitosterols showed the ability to raise the important CD3 and CD4 immunity chains, while they dropped in the placebo group. Also, while inflammation and stress went up in the athletes on a placebo, they went down in the marathoners on sterols and sterolins.

Adults: Take 4 capsules daily with food or as directed by your health-care practitioner. If you are taking other medications, take this product a few hours before or after them.

Cautions and warnings: May cause increased bloating and flatulence.

Contraindications: Consult a health-care practitioner prior to use if you are pregnant or breast-feeding.