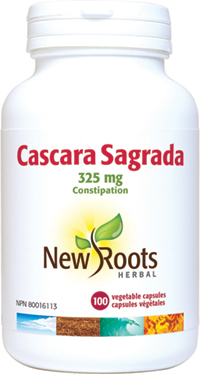 Cascara sagrada is a small deciduous tree belonging to the buckthorn family, native to northern California, southern British Columbia, and east to the Rocky Mountains in Montana. Its distinctive red bark has been used for centuries by the indigenous peoples of the Pacific Northwest for its laxative effects.

Relief for constipation ranks as its most common therapeutic application. Anthraquinone, an organic compound present in the bark of Cascara sagrada, is credited with laxative effects which may include increased fluid within the colon and stimulation of colon contractions essential for gastrointestinal transit.

Cascara is safe and effective for inclusion in detoxifying and cleansing programs and formulations when taken in moderation.

Adults and adolescents ≥ 11 years old: Take 1–3 capsules per day or as directed by your health-care practitioner. Allow 6–12 hours for laxative effects to occur. Take a single dose at bedtime. Take 2–3 times per week. If results are not observed, the frequency of use may be increased up to once daily. If you are taking other medications or health products, take this product a few hours before or after them. Consult a health-care practitioner for use beyond 7 days.