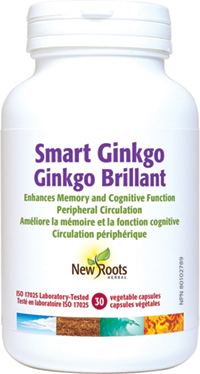 Our synergistic combination of nutraceuticals helps support brain function, mental alertness, and memory by increasing blood flow to the brain and extremities.

Smart Ginkgo is formulated to address the maintenace of the brain. It supports our neurotransmitter system with a selection of nutraceuticals and standardized herbal extracts.

Ginkgo biloba—standardized to 24% ginkgo flavonglycosides and 6% terpene lactones, also containing ginkgolides and bilobalides in their proven ratios—is the predominant marker in Smart Ginkgo that has been shown to improve critical oxygen delivery through capilliaries and protect the brain from environmental toxins.

ʟ‑Glutamine is an amino acid that can cross the blood-brain barrier to be converted to gamma-aminobutyric acid (GABA). GABA acts as an inhibitor of excess neurotransmission to curb anxiety and allow the brain to function more effectively.

ʟ‑Theanine in Smart Ginkgo stimulates production of the amino acids that calm the brain, such as GABA and dopamine.

Gotu kola is a rejuvenative nervine recommended for nervous disorders, epilepsy, senility, and premature aging. As a brain tonic, it aids intelligence and memory.

Smart Ginkgo is formulated to protect and support your brain, to allow you to cope with the stressors of modern day life and realize your full cognitive potential.

Adults: Take 1 capsule daily with food or as directed by your health-care practitioner.

Duration of use: Consult a health-care practitioner for use beyond 4 weeks.