Could You Be Suffering from SIBO? | New Roots Herbal | Natural Health Products

Could You Be Suffering from SIBO?

Small intestinal bacterial overgrowth (SIBO) is an overgrowth of bacteria that have migrated from the large intestine, where they are useful, into the small intestine. Unfortunately, once they reside in the small intestine, they can cause numerous symptoms because they ferment foods that are being consumed, a process normally taking place in the large intestine. This abnormal fermentation releases hydrogen and/or methane gasses, which are the main cause of SIBO symptoms. SIBO may be the cause of many digestive issues, especially for those diagnosed with irritable bowel syndrome (IBS), as 80% of people with IBS have been shown to suffer from SIBO.

SIBO symptoms can include abdominal bloating and/or discomfort/pain after meals, excessive burping and/or gas, nausea, heartburn/GERD, sensation of fullness and slow digestion, chronic loose stools and/or constipation, alternating loose stools and constipation, urgent bowel movements, fat in the stool, iron and/or B12 deficiencies, and skin issues like acne rosacea. SIBO is also suspected if the low-FODMAP diet is helpful and if supplementing with probiotics seems to aggravate or is not very effective. The main cause of SIBO is a dysfunctional migrating motor complex (MMC), but others can include hypochlorhydria (low stomach acid), bile insufficiency, traumatic brain injury, intestinal strictures/adhesions, and ileocecal valve dysfunction.

The MMC, when properly functioning, moves digested food from the small intestine to the large intestine. If you get food poisoning or gastroenteritis (an inflammatory digestive-tract illness causing vomiting/diarrhea), then this could cause the MMC to weaken. It has been shown that about 1 in 5 people’s MMC does not recover after the illness, thus leading to SIBO. When the MMC is weak, food is slower to move out of the small intestine which, in turn, causes bacteria from the large intestine to enter the small intestine, where they start to proliferate and overgrow. This overgrowth can negatively impact the body in many ways, and conditions that can be associated with SIBO include IBS, anemia, intestinal permeability, nonalcoholic fatty liver disease, rosacea, interstitial cystitis, hypothyroidism, restless leg syndrome, histamine intolerance, and autoimmunity.

If SIBO is suspected, then the SIBO breath test is recommended. If positive, then appropriate administration of a bacteria-eradication treatment is utilized based on the results. Once the overgrowth is treated and the digestive and associated symptoms resolved, the digestive tract can then be healed.

The SIBO breath test requires a prep diet the day before testing, with the goal being to starve the bacteria so the most accurate results can be seen during testing. There is an overnight fast, then a baseline breath sample is collected. After this, a solution called lactulose is taken, that will feed the SIBO, if they are present. These will in turn release hydrogen and methane gasses that will be detected on breath samples that are collected over the next three hours.

If there is a rise in gasses, then this would be considered a positive result.

There are two phases of SIBO treatment, which include the antimicrobial or eradication phase, and the recovery phase, which includes digestive healing and prevention of SIBO from returning. For dietary treatment of SIBO, it is imperative to leave 2½–3 hours between meals in order for the MMC to be able to complete its full contraction. During the treatment, fermented foods like kimchi, sauerkraut, kombucha, yogurt, miso, etc. should all be avoided, as they contribute to bacterial overgrowth in the small intestine. Treatment is dependent on the amount of gasses present and typically includes 2–4 weeks of antimicrobials, including biofilm disruption. Biofilm disruptors are key to the success of SIBO treatment and include a combination of bismuth subnitrate; 2,3-⁠dimercapto-1-⁠propanesulfonic acid (DMPS); and alpha-lipoic acid (ALA), N-acetylcysteine (NAC), or black cumin seed oil. Biofilms are produced by the bacteria as a defence and a way to evade antimicrobial treatments, thus it is key to disrupt the biofilm in order for the antimicrobials to be effective. The most common antibiotics that are used to treat SIBO include rifaximin and neomycin. 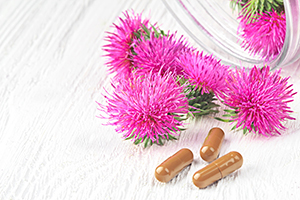 Other herbal antimicrobials that can be included in treatment are goldenseal, myrrh, thyme, garlic, oregano, berberine, and silver hydrosol. It is important to also include very specific probiotics to replenish the good gut bacteria that may be killed off in the large intestine during the antibiotic treatment. The specific probiotics include only Bifidobacteria species, as Lactobacillus species can further aggravate the overgrowth. Occasionally, Saccharomyces boulardii probiotics are included in the treatment. It is always essential to support the liver when doing antimicrobial treatments, and this can be done by liver-support supplements that can include milk thistle, turmeric, dandelion, artichoke, ALA, schizandra, and NAC. In more acute cases of SIBO, longer-term biofilm disruption alone may be required to break the barrier down before using antimicrobials.

Once eradication is successful, recovery treatments can begin. Gut-healing supplements can include ʟ-⁠glutamine, zinc carnosine, and N-acetylglucosamine. The MMC also needs to be restrengthened in order to prevent SIBO recurrence. This can be done with a pharmaceutical called prucalopride or natural treatments like 5-⁠hydroxytriptophan (5-⁠HTP) or ginger. It is also crucial to repair low stomach acid or lower esophageal dysfunction via betaine hydrochloride and/or ᴅ-⁠limonene.

SIBO is a very common cause of digestive issues and, as mentioned above, can cause several other problems in the body. If you suspect you may have SIBO, visit a local naturopathic doctor to have a breath test done. 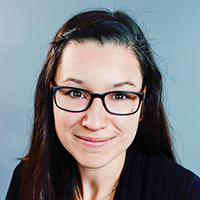 She practices in beautiful Kimberley, BC, with a special interest in women’s health, prenatal health, and digestive health. She utilizes diet and lifestyle counselling, botanicals, acupuncture, and nutritional supplementation to ensure patients receive an individualized, research-based, holistic approach to treatment.

Could You Be Suffering from SIBO?
Related Articles
Health
Kidney Kare
Health
How You Can Support Your Liver This Holiday Season
Health
Difficulty Managing Your Weight? It May be Your Slow Metabolism (Part 2)
Categories
Health Recipes Lifestyle & Wellness Naturopathic Currents
Subscribe to our Newsletter ! Never, Maybe Later Subscribe
Your subscription to New Roots Herbal could not be saved. Please try again.
Your subscription to New Roots Herbal has been successful.