Straight Talk on Probiotics: Health Benefits and the Science Behind Them

by with Jamie Bussin and Dr. Philip Rouchotas, MSc, ND

On the September 12 episode of The Tonic talk show, Jamie Bussin interviewed Dr. Philip Rouchotas, MSc, ND, discussing the health benefits and science behind probiotics. The following is an excerpt from their dialogue.

J: I’m hopeful that today’s conversation will help everybody move forward with their health. So let’s talk about probiotics.

P: This is a topic I love talking about. Probiotics are fascinating little organisms; they are live bacteria. There are many different species that live throughout our digestive tract. In fact, we have ten times more bacteria living in our intestines than we have cells throughout our bodies. It’s a phenomenal concept to try to wrap our heads around. These little guys interact intimately with our bodies, and every day we’re learning more about how they impact human health.

J: I agree, and it’s more expansive than we might think. Probiotics affect digestion and nutrient assimilation, but the picture is so much bigger than that. So what are the health benefits of taking probiotics?

P: The list of common health concerns that are positively impacted by probiotics is almost insurmountable. The one we tend to think of first is digestion. We know that for digestive issues, from the mild being irritable bowel syndrome (IBS) or constipation to the very severe such as ulcerative colitis or Crohn’s disease, multiple human studies demonstrate probiotics really help.

P: Many people are familiar with the concept that most of our immune system lives in the gut, specifically the small intestine. Billions of these bugs live there, intimately interacting with our immune system and fostering tolerance. To explain it, think about seasonal allergies. Pollen, grass, and ragweed are normal inhabitants of the environment. When you walk outside, if they cause an immunological response, it means you have lost tolerance. You are reacting to something that you’re not supposed to. These bugs interacting with our immune system help achieve and maintain tolerance, basically telling the immune system: “Hey, I’m foreign, I’m a bacteria, not a human cell, yet it’s OK that I’m here. Calm down! Don’t react.” And in doing so, they limit the list of diseases that can be induced.

P: Essentially, the bugs interacting with your immune system will calm it down. They communicate that a certain level of foreign substance is acceptable. When you lose that tolerance, the immune system starts to attack its own tissues. An unbalanced microbiome directly contributes to processes such as arthritis and inflammatory bowel disease, even chronic headache and a list of skin ailments including eczema, psoriasis, and acne.

P: Many people have heard the phrase that your gut is like your second brain. You actually have more serotonin in your gut than you do in your brain. We now realize that probiotics also have a very profound effect on mental health. There are multiple studies showing that if you start taking a probiotic, mood improves, and you feel less anxious. That’s the gut-brain connection. So it’s this panacea of impact that probiotics have. I may have made it sound like they slow immunity down—that’s not accurate. They do something almost miraculous. On the one hand, they shut down subsets of immunity that would drive auto-immune disease. Yet at the exact same time, they’re able to ramp up other subsets of immunity that help us fight infection.

P: We have a huge slew of human studies showing that if you take a probiotic, you’re less likely to get a cold or flu, and if you do get it, you recover much quicker. It’s really remarkable.

J: Obviously, humans have been living with bacteria in their guts forever. Can’t we just get enough of these good bugs in our tummy through our daily diet? 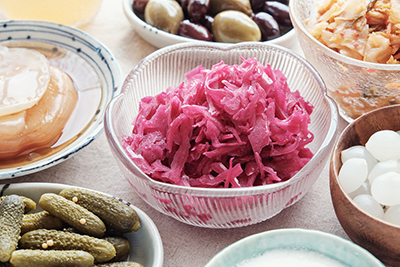 P: So, probiotic-containing foods—including yogurt, sauerkraut, even olives; basically anything fermented—can contribute to a more appropriate probiotic environment. The foods we eat become food or “prebiotics” for these bugs. It’s clearly been shown that if you live on a fast food–based diet, it can cause havoc to this microbiome, whereas if you consume a diet very rich in vegetables and fruit, it encourages this healthy balance of microbes in the gut.

J: Alright, let’s circle back to probiotics in supplement form. If I were to go and look for them, I would see something on the packaging referencing CFUs. What are they?

P: We’re talking about live bacteria, measured as CFUs, which stands for colony-forming units. It’s basically a count of how many of these bacteria are present in this particular product that you’re looking at. A standard adult dose for a probiotic would be 10, maybe 20 billion a day. I know that number sounds astronomical, but kept in the context of our small intestine, where most of this magic is happening, we have 10 to 100 billion bugs. So if you take 10 or 20 billion in a capsule, it will have a significant effect on that population of microbes.

P: Then people say: “But there are ones out there that are 50, 100, or even 120 billion. When would I want to use one of those?” On occasion, you may want to have an impact on your colon, which has 10 to 100 trillion. It’s a crazy number, but that’s how many live there. If you want to impact the colon, you need to look at larger doses of probiotics. If you want to have an impact in a population that’s 10 to 100 trillion, 10 billion isn’t going to do that much. So, when you know you have a problem in the colon, like ulcerative colitis or Crohn’s disease, you want to consider a higher dose. You would also want higher doses when recovering from a prescription of antibiotics.

J: Alright. So, what’s the most effective form of probiotic? 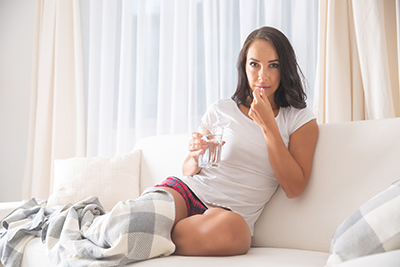 P: There are a few things to look at, and the industry could be a tough place to navigate. I feel sorry for the consumer that walks into a health-food store, stands in front of a fridge or a wall, and is overwhelmed by what they see. Number one: Look for multistrain probiotics. There are close to 1,000 different species of bacteria living in your gut. You want to take one that has between 10 and 20 different types of probiotics, so multistrain. Number two: You want to get a probiotic that’s refrigerated. There has been a push in recent years for the concept of shelf-stable probiotics, which I’m opposed to. There are a few species that can survive at room temperature, but most can’t—and they degrade very quickly. Bifidobacterium bacteria, an important therapeutic classification, dies completely within 30 days.

P: And you want one with enteric coating. Remember: These are live bacteria, and your stomach is so acidic, probiotics don’t survive the magnitude of your stomach acid. The little joke I make is that if you put your hand in your stomach, you won’t have a hand left. With enteric coating, the capsule has a coating on it that won’t let it open in your stomach. It is engineered in this way—think food science—that prevents capsule disintegration in the stomach. But as soon as it enters the small intestine, it opens up. Your body has mechanisms that neutralize stomach acid in the upper small intestine. That change—going from very acidic pH to neutral pH—triggers the enteric coating to open and release the probiotics into the small intestine, alive. The science is very clear on this. Take two identical probiotics, one enteric-coated, one not. The enteric-coated one delivers greater than five times more live bacteria to your intestine.

P: So, I would say those are the three key things to keep in mind when looking for a probiotic: enteric coating, refrigerated, and multistrain.

P: Great question! Unfortunately, that changes from brand to brand. Find yourself a health-food store you trust and talk to the staff. Some brands are labelling their amount at time of manufacture. There can certainly be degradation, depending on how it’s transported and time-stored. There is less degradation when stored in the fridge, but still. There are also companies indicating the colony-forming units at time of expiry. You’ll find some companies in the industry are guaranteeing that at time of expiry—assuming you kept it in the fridge—it will have the number of bacteria that are claimed on the label.

Straight Talk on Probiotics: Health Benefits and the Science Behind Them
Related Articles
Health
Origins of Essential Oils
Health
Transformation Through HOPE-Centered Intentional Living
Health
Getting the Right Balance of Omega Fatty Acids and Their Benefits for Pregnancy
Categories
Health Recipes Lifestyle & Wellness Naturopathic Currents
Subscribe to our Newsletter ! Never, Maybe Later Subscribe
Your subscription to New Roots Herbal could not be saved. Please try again.
Your subscription to New Roots Herbal has been successful.